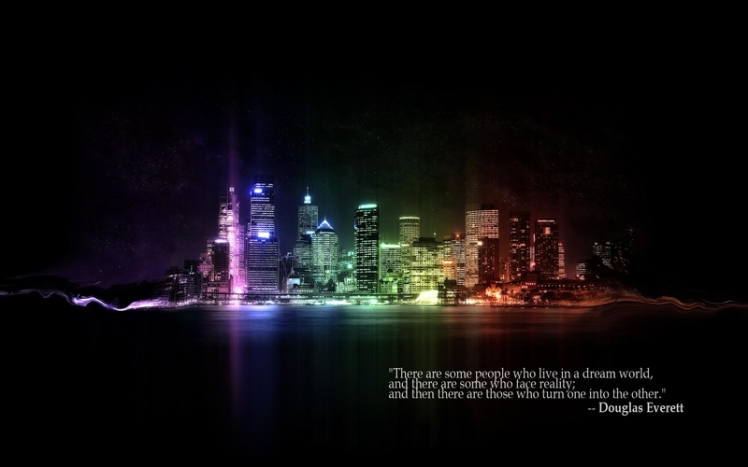 If you do what you love and love what you do, you’ll never have to work a day in your life.

Dreams and reality are one of the largest “paradoxes” in today’s world, but it doesn’t have to be so. Many have dreams and visions, but lose touch with physical reality and become consumed by thought. Others are practical and realistic, but don’t dare to dream big nor attempt change. What Everett means, however, is that you you turn your reality into a dream by turning a dream into reality.

To turn a dream into reality requires hard-work, time, patience and commitment. In the mid-nineteenth century, man wanted a better way to communicate – Antonio Meucci came up with the original idea for a telephone. In the late nineteenth century, man dreamed of having a machine that could calculate – Charles Babbage invented the [modern] computer. In the twentieth century, man dreamed of flying – the Wright brothers made this a reality. These greatest inventions did not happen overnight, nor did their creators have the resources to construct them in ways they would have wanted. So they sold their idea.

Almost two centuries later, their dream manifested into the reality in which we now live. This reality became a dream when improvements started to be made – this reality created possibility to dream, dream, dream and for some, create. We now have Smart phones, touch pads, fighter jets and rockets. We have explored space, we have explored deep waters; we have connected with others in the human race, and we have become globalised.

The greatest thinkers are recognised for their dreams not because they had an idea, but because they turned their idea – their dream – into our reality. They concretised their dreams by making it happen – they believed in what they were doing. They were passionate.

The realists of our world keep dreamers grounded, but also provide the resources for dreamers to sell ideas. Dreamers of our world help keep the world from the imminent downfall of mankind, simply by generating, manufacturing and improving items which were once someone else’s dream. By constructing parts of the world that make it what it is today – by bringing enjoyment, entertainment and challenges to the world.

Realists look at possibilities and assess the outcome before deducing a strategy; dreamers look at the present and assess possibilities. Without one, the world will either become a place lacking in culture or an existentialist entity that soon turns into a concept.

Nonetheless, to turn a dream into a reality takes time, work and effort, for the only place where success comes before work is in the dictionary. Working with each other breeds stronger outcomes than working for each other, for unity ultimately surpasses competition.

Turning reality into a dream requires you to love what you do, and do what you love – and it’s not work if you love and believe in what you do.

Dream the reality you want to live – then turn that reality into the dream you dreamed.

Passion and Dreams ~Passion is the genesis of genius” ~Galileo~
Live each day as if it’s your last: one day you’ll certainly be right
Perspectives