Spent the afternoon walking around the Hong Kong Island scene today. Here are some highlights of what the Internet can’t really show you. Parts of the protest you simply have to be there to experience.

The atmosphere was peaceful and calm, quite surreal in the sense that there was so much energy and passion, yet people were so relaxed and driven at the same time. It was inspiring to see, and made me very, very proud to be a part of this. There was even section where student were sorting through recycling and openly collecting rubbish. Others were handing out food and cooling pads.

The activists stood with bullhorns, but everyone had their own section so it wasn’t just a bunch of noise. The activists spoke passionately and convincingly, using relatable analogies and metaphors that are a heavy structure of the Chinese language. Much of what was said can’t be translated literally into English, but most were along the lines of “Universal Suffrage does not mean you give us options, it means we choose our own.”

This little boy was trying to understand how a Go Pro works, so he listened to his father and then relayed the information (in English) to others around him to ensure he understood. Kudos to this kid for his curiosity!

Motivational signs hung all over the protest arena, to remind Hong Kong citizens to keep doing what they’re doing because many are becoming inspired.

Overnight protesters set up tents to rest and also shelter themselves from the tear gas, should there be another outbreak.

This one was taken on Monday, at the Mong Kok protest, during my lunchbreak.

Not only have government cleaners and the Environmental Protection Department offered their help, but also students and young children were seen actively cleaning and collecting rubbish. Furthermore, dedicated students also sorted through recycling.

One of the mantras to motivate activists: Your arrogance keeps us here. Solidarity will see us through. Taken with the symbol for the Legislative Council in the top right corner (Chinese Symbol for LegCo, but also means “To Stand For.”) 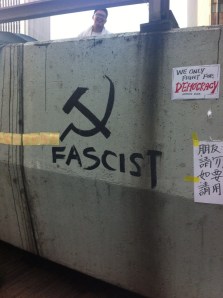 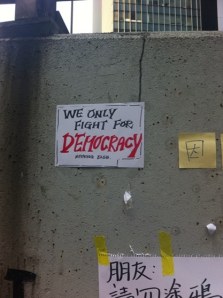 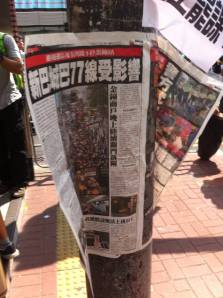 One thought on “National Day at The Umbrella Revolution”